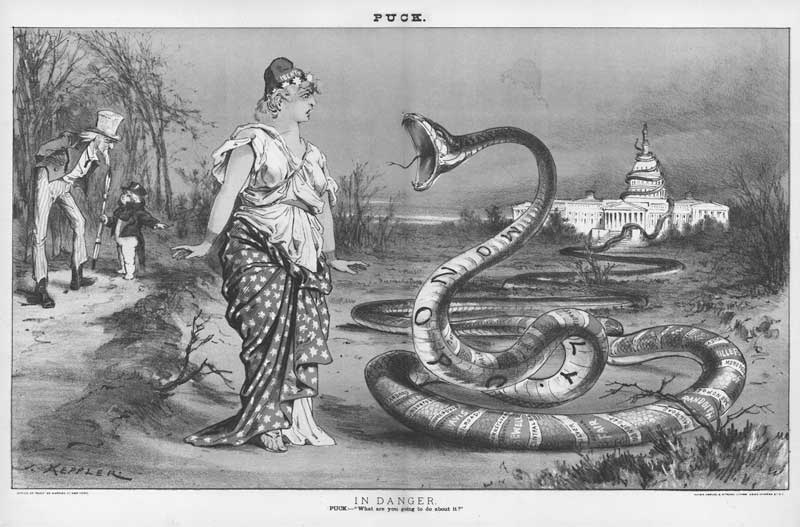 For a “progressive” presidential candidate, US Senator Elizabeth Warren (D-MA) is remarkably, well, conservative. Her proposals are neither new nor of the “democratic socialist” variety.  In fact, her aim is, as Matthew Yglesias puts it at Vox, “to save capitalism”  with stock proposals from the first half of the last century.

Much of her campaign platform co-opts Franklin Delano Roosevelt’s  1930s “New Deal” emphasis on social welfare, job creation, infrastructure, and highly progressive taxation to pay for it all — solutions she considers proven, for problems she considers similar.

Her latest proposal, though, takes an earlier Roosevelt as its model. Like  “Trust Buster”  Teddy Roosevelt, she wants to use regulation and antitrust enforcement to “break up monopolies and promote competitive markets.” Her initially announced targets for the idea included Facebook, Google, and Amazon. A couple of days later, she added Apple to  the list.

Interestingly, in her search for monopolies to slay, she ignores the biggest, most powerful, and most lucrative monopoly in America: The US government.

In 2020, the federal government expects revenues of about $3.4 trillion.

And then there’s market share. No one really has to do business with Facebook, Google, Amazon, or Apple. There are numerous alternatives to the offerings of each, and many consumers choose those alternatives.

Uncle Sugar, on the other hand, boasts 100% market share for his offerings. You’re required to be his paying customer whether you like it or not. Many of the alternatives are outright illegal, and among the ones that aren’t, you’re required to pay for them in addition to, not instead of,  the federal government’s services.

That’s the very definition of “monopoly.” And it’s the monopoly Elizabeth Warren wants to serve as CEO of.

Is Senator Warren is serious about “breaking up monopolies” and “promoting competitive markets?”

If so, I look forward to her proposal for breaking up the federal government and allowing real alternatives to compete for its market share.

A good start would be 100% federal tax deductibility for the purchase of private sector services that replace the government’s offerings, or a pro rata clawback for binding agreement to not use a particular government service.

Absent such a proposal, seems to me she’s just another greedy monopolist looking to suppress the competition.

It’s hard to be objective about Roy Moore. Ever since his days as circuit judge of Etowah County, Alabama, he’s been a hero to religious conservatives and the bane of civil libertarians. The former powered his two elections to the office of Chief Justice of the Alabama Supreme Court, on his promise to “return God to our public life and restore the moral foundation of our law.” The latter effected his two removals from that office over his insistence that his religious beliefs trump the law (including the US Constitution).

That Moore is one of America’s most controversial political figures shouldn’t distract us from the most obvious and important question concerning the latest controversy: Did he, as alleged in a Washington Post expose,  engage in sexual activities with a 14-year-old girl (and other minors) while he was a thirty-something prosecutor?

Moore’s enemies and the Democratic Party want it to be true. They weren’t able to beat him at the ballot box in either of his two runs for Chief Justice, or in this year’s Republican primary for US Senate. And removing a US Senator is harder than beating him in an election before he becomes one.

Moore’s supporters want it to be false — not just because election results depend on it, but because no one likes to learn he or she was conned by a supposed moral exemplar.

The Republican Party NEEDS the allegations to be false. Unless they collapse in a spectacular manner, the GOP loses. They lose a Senate seat if Moore loses the election. If he wins it, the party’s Senate majority is faced with the choice of seating him and thereby publicly owning his alleged sins, or refusing to seat him and facing the ire of his supporters. If the allegations stand up at all, that thin Republican Senate majority is in danger next November either way.

The most sickening aspect of this whole thing is that some of Moore’s supporters tell us the truth doesn’t matter — that it was a long time ago, that he isn’t accused of forcibly raping anyone, and that hey, the Virgin Mary was young too,  so no biggie. That dog won’t hunt.

I personally loathe Roy Moore, and don’t hold with a “presumption of innocence until the charges are proven beyond a reasonable doubt” standard when it comes to personal reputation. Public opinion is not a criminal court proceeding. My personal biases push me toward believing Moore’s accusers.

On the other hand, the timing is suspect. Why are we only now hearing things that, if true, would have sent him home in disgrace, possibly even to prison, at previous points during his long career?

That it took a personal scandal to slow Moore’s advance toward Capitol Hill is the real embarrassment here. Roy Moore should not be elected to the US Senate because he opposes the values the United States is supposedly founded upon. Hopefully Alabama voters will make the election about that and write in Libertarian candidate Ron Bishop.

In mid-February, Florida’s Division of Elections stripped the state’s third largest political party of its official recognition. Tallahassee’s excuse for ending the Independent Party’s ability to put candidates on the ballot and disenfranchising its 260,000-plus registered voters? The party organization’s 2014 financial audit wasn’t conducted by a Certified Public Accountant.

Florida law doesn’t specify any such CPA requirement, and even if it did this dirty trick would exemplify the real purpose of so-called “ballot access laws”: To safeguard the Republican and Democratic Parties’ near-complete control of American elections.

In every election cycle, “third” parties shell out big bucks just to be allowed to present their candidates to voters. According to Nicholas J. Sarwark, chair of the Libertarian Party’s national committee, the party, its state affiliates, and its presidential campaign spent more than $750,000 on ballot access — that is, on jumping through bureaucratic hoops instead of on getting its message out — in 2016.

American ballot access laws only date back to the 1880s. Before that, voters cast ballots in one of three ways: They received ballots from and printed by their political parties of choice, they wrote out their own ballots by hand, or, if they couldn’t write, they verbally dictated their choices to election officials who wrote down those choices for them in the presence of witnesses.

Once state governments overthrew those methods in favor of “Australian” ballots — standardized ballots printed by the governments themselves — the next step was feigned concern over  “voter confusion” from “too many” candidates, quickly followed by the erection of barriers to “solve” the “problem.”

These days ballot access laws are so many, so varied and so confusing that there’s an entire industry centered around helping parties and candidates interpret and meet the guidelines. There’s even a dedicated publication, Ballot Access News, dedicated to sorting out ballot access laws on a continuing basis.

And, once again, it’s important to keep in mind the real purpose of these laws: To ensure that, with rare exceptions, only Republicans and Democrats are elected to public office. Or, to put it more plainly, to protect those parties from the risks of free and fair elections.

The states and the establishment parties have proven, over and over, that they can’t be trusted with control of ballot access. Time to take that control away.