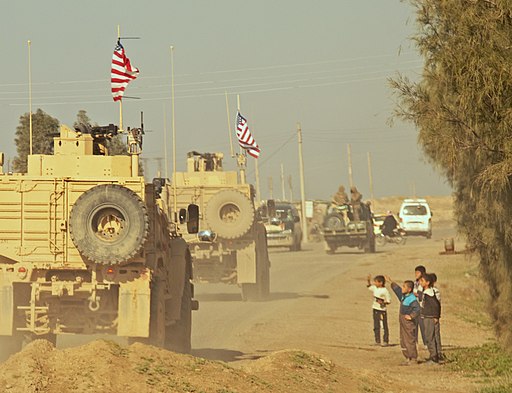 In March of 2018, US president Donald Trump promised “we’ll be coming out of Syria, like, very soon.” That December, he issued an order to begin withdrawing US troops. Apparently the order never got executed. Most of a year later, US forces remain.

Now Trump and his opponents are arguing over his decision to move a few dozen of those troops around within Syria, to get them out of the way of a Turkish invasion force massing on the border. Both sides are pretending that a tiny troop movement constitutes the supposed withdrawal he ordered last December.

This minor situation illustrates a major problem  that two early presidents warned us about.

“It is our true policy to steer clear of permanent alliance with any portion of the foreign world,” George Washington said in his farewell address.

Four years later, Thomas Jefferson called for “peace, commerce, and honest friendship with all nations — entangling alliances with none” in his inaugural address.

I wonder what Washington and Jefferson would think of the continued presence of US troops in Europe and Japan  75 years after the end of World War Two, or in South Korea 66 years after the ceasefire on that peninsula?

I wonder what they’d have to say about NATO, a multi-country military alliance still operating three decades after the collapse and disappearance of the enemy it was supposedly formed to guard against?

Because Trump failed to follow through on his promise to get out of Syria, he now finds himself caught between two putative allies: NATO member Turkey on one side, the Kurds (an ethnic group which Washington periodically uses in its regional wars then invariably  abandons) on the other.

The Turks and the Kurds have a long and antagonistic shared history.

Turkish president Recep Tayyip Erdogan plans to invade Syria to establish a “safe zone,” by which he means a “zone without armed Kurds in it.” He wants US troops out of the way.

The Kurds, having carved out something resembling a small nation-state of their own in northern Syria with US assistance and as a side effect of chasing the Islamic State out of the area,  would rather those US troops stayed so that the Turks won’t have as free a killing hand.

Given the choice between pleasing Turkey (a major regional power and a NATO ally) or pleasing the Kurds (who have no internationally recognized state of their own and depend entirely on the US for the viability of their enclave), I can’t say I blame Trump for caving to Erdogan’s demands.

But if the US hadn’t invaded Syria in the first place (under former president Barack Obama), or if Trump hadn’t escalated the war instead of ending it when he took office, or if he had kept his subsequent promise to withdraw US forces, he wouldn’t have found himself in the current situation.

Like adhesive bandages, entangling alliances cover ugly wounds and seldom come off without pain. But leaving them in place and letting the wounds fester is even worse.