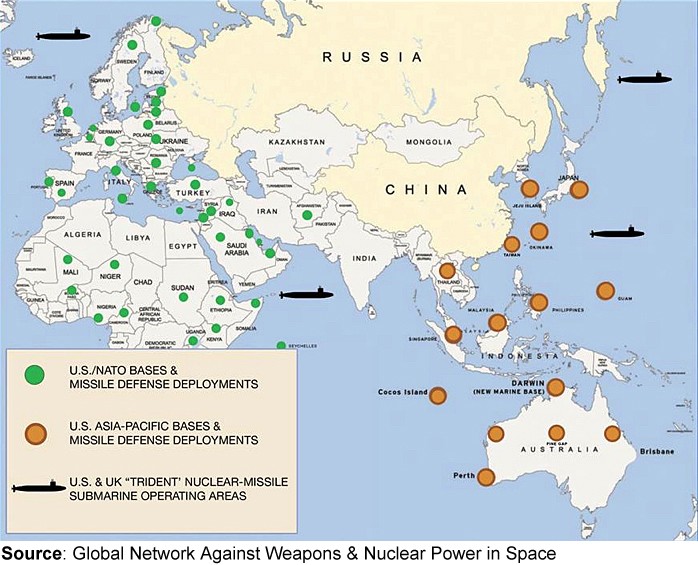 “U.S. foreign military bases are the principal instruments of imperial global domination and environmental damage through wars of aggression and occupation.” That’s the unifying claim of the Coalition Against US Foreign Military Bases (noforeignbases.org), and it’s true as far as it goes.  But as a signer of the Coalition’s endorsement form, I think it’s worth taking the argument a bit further. The maintenance of nearly 1,000 US military bases on foreign soil isn’t just a nightmare for peaceniks. It’s also also an objective threat to US national security.

A reasonable definition of “national defense,” it seems to me, is the maintenance of sufficient weaponry and trained military personnel to protect a country from, and effectively retaliate against, foreign attacks.  The existence of US bases abroad runs counter to the defensive element of that mission and only very poorly supports the retaliatory part.

Defensively, scattering US military might piecemeal around the world — especially in countries where the populace resents that military presence — multiplies the number of vulnerable American targets. Each base must have its own separate security apparatus for immediate defense, and must maintain (or at least hope for) an ability to reinforce and resupply from elsewhere in the event of sustained attack. That makes the scattered US  forces more, not less, vulnerable.

When it comes to retaliation and ongoing operations, US foreign bases are stationary rather than mobile, and in the event of war all of them, not just the ones engaged in offensive missions, have to waste resources on their own security that could otherwise be put into those missions.

They’re also redundant. The US already possesses  permanent, and mobile, forces far better suited to projecting force over the horizon to every corner of the planet on demand: Its Carrier Strike Groups, of which there are 11 and each of which allegedly disposes of more firepower than that expended by all sides over the entire course of World War Two. The US keeps these mighty naval forces constantly on the move or on station in various parts of the world and can put one or more such groups off any coastline in a matter of days.

The purposes of foreign US military bases are partly aggressive. Our politicians like the idea that everything happening everywhere is their business.

They’re also partly financial. The main purpose of the US “defense” establishment since World War Two has been to move as much money as possible from your pockets to the bank accounts of politically connected “defense” contractors. Foreign bases are an easy way to blow large amounts of money in precisely that way.

Shutting down those foreign bases and bringing the troops home are essential first steps in creating an actual national defense.