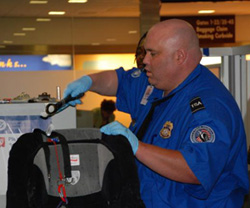 A TSA officer inspects a piece of luggage. Source: Wikipedia

“Inappropriate.” “Invasive.” That’s how Kevin Payne of San Diego, California describes a Transportation Security Administration employee’s “patdown” of his daughter Vendela at the Raleigh-Durham, North Carolina airport. He’s unduly kind. The “patdown” — which Payne captured on cell phone video — was a sexual assault which, in any sane society, would have ended with the perpetrator’s arrest.

The TSA’s response? The assault “followed approved procedures.” Turning every airport terminal in the US into the functional equivalent of one of Uday Hussein’s “rape rooms” is apparently a feature, not a bug, in America’s post-9/11 “security” software.

It’s time and past time to permanently disband TSA and let airports and airlines go back to providing for their own security.

After 13 years of operation, with an annual budget of nearly $7.5 billion, the TSA has yet to demonstrate its usefulness in stopping terrorism aboard airplanes. It routinely fails tests in which inspectors smuggle weapons past its security checkpoints. So far there’s been not a single verifiable instance of TSA foiling a terror plot. And it’s invariably local law enforcement, not TSA, which  effectually responds to security incidents at airports (as in the 2013 LAX attack, in which a TSA agent was killed before local airport police shot the gunman, and the 2014 New Orleans incident in which a deputy sheriff shot a man who was chasing a TSA agent with a machete).

The only thing the organization appears to be any good at is empowering its employees to ogle and feel up travelers and steal goodies from travelers’ luggage.

As for the costs, that $7.5 billion budget doesn’t even begin to touch them. According to the US Bureau of Transportation statistics, there were 685 million airplane passenger boardings in the United States between October 1, 2014 and September 2015. Assuming an average wait time of 10 minutes to get through the TSA’s screening line, that’s 1.1 million hours of lost time for passengers — hours they could have spent working, or shopping, or getting to where they were going, instead of waiting to find out whether or not they’d win the TSA lottery to have their genitals fondled or their laptops swiped from their checked luggage.

Yes, I get it. 9/11 was a horrible day and the urge to “do something” to prevent future attacks is entirely understandable. But the Transportation Security Administration is clearly not up to the task. It doesn’t make us safer. It just inconveniences, assaults and steals from us.  Let’s end this nonsense.