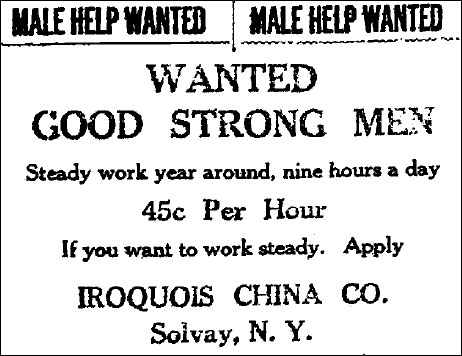 “I’m a small business owner,” someone identified as “Andy” writes to syndicated advice columnists J.T. and Dale, “and I can’t believe how many people just don’t want to work anymore. … my business is suffering, because I can’t get employees.”

My social media feeds are full of photographs — who knows if they’re real or not? I haven’t seen any in my town, but friends say they’ve seen them elsewhere — of signs at businesses apologizing for being “short-staffed,” with “people just don’t want to work” complaints appended.

The country seems adrift in a sea of whiny employers. What’s really going on here?

The standard explanation for a little while was that  “enhanced” unemployment benefits that continued even after pandemic-related (but politically created) economic shutdowns ended made it more lucrative to sit at home and play video games than, say, flip burgers. And who could be blamed for taking that deal?

That explanation’s not making much sense anymore as extra unemployment benefits, “stimulus” checks, and eviction moratoria fade into memory.

US unemployment is low  (5.2% in August; economists consider 5% or lower to effectively constitute “full employment”). Those who “want to work” are working. Why do so many seemingly not “want” to?

Put simply, they’re not being offered as much for their time and effort as they consider it to be worth.

The pandemic shutdowns and benefits affected that in two big ways.

First, some people who were able to retire decided to do so, when otherwise they might have stuck out a few more years in the work force. The available supply of labor was thus reduced.

Second, some people learned to be thriftier and make do on less over the last 18 months. You’ll bust your hump, whatever it takes, to keep a roof overhead and ramen in the pantry. Once that’s covered, though, you’re in a position to ask yourself how many hours a week you’re willing to trade for Netflix, craft beer, and expensive sneakers. The answer, right now, would appear to be “fewer.”

Labor is a commodity. It’s something the worker sells for money. And as with any other commodity, supply versus demand tells the story.

When there’s plenty of supply versus demand  — that is, high unemployment — employers can drive a hard bargain. “Don’t want to clean toilets for $7.50 an hour? No problem. There are ten other people who will.”

But when demand exceeds supply, as now, the shoe is suddenly on the other foot. “Don’t want to pay $20 an hour to get your toilets cleaned? No problem. There are ten other employers who will.”

Yes, workers and employers complain whenever they find themselves on the less profitable side of that equation. But in the end, money talks and complaints walk.