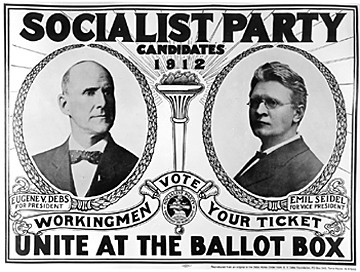 A February Harris poll finds that 49.6% of Millennial and Generation Z Americans would “prefer living in a socialist country.”

US Senator Bernie Sanders (I-VT) and US Representative Alexandria Ocasio-Cortez (D-NY), among other politicians, proclaim a message of “democratic socialism,” evoking an ideology last ascendant in the early 1900s when Eugene Debs and Norman Thomas moved the needle in US elections.

But the devil is, as always, in the details. The goals of today’s American “democratic socialism,” as laid out in Ocasio-Cortez’s Green New Deal resolution, in Sanders’s “Stop BEZOS Act,” etc. look a lot more like Franklin Delano Roosevelt’s effort to “save capitalism” through welfare statism than like the proposals of socialism’s last rise to prominence.

The essence of socialism as laid out by Proudhon and Marx and promoted by the International Workers of the World, et al., came down to destroying the wage system and building a classless society based on worker ownership of the means of production.

Those earlier socialists would almost certainly have lauded gig economy workers as examples of what socialism sought. Today’s socialists disdain them.

Consider gig economy drivers, once just called “gypsy cabbies.” In recent years many of them have chosen to affiliate with services like Uber and Lyft to get easier connections to people seeking rides.

Gig economy drivers own the means of production (their cars).

Gig economy drivers set their own hours and choose their own workplaces instead of slaving away on  someone else’s terms.

Gig economy drivers can use customer discovery services like Uber/Lyft, or they can go their own ways (many Uber drivers give me their cards, telling me to call them directly next time and cut out the capitalist middleman).

But today’s “democratic socialists” fought tooth and nail to preserve the capitalist “medallion cab” monopoly, and having lost that fight they’ve re-oriented their struggle toward roping the drivers, and the companies they choose to work with, into the old-style capitalist “wage employee” system.

Even the most virulent revolutionary Marxism posited that the state would wither away as workers seized the means of production, got rid of the bosses, and started working for themselves. That didn’t work out — the socialist parties ended up substituting themselves for the old ruling class, operating in the name of, but not as true proxies for, “the workers” — but that was the goal.

In the US, the same kind of substitutism came about “democratically” and incrementally as “progressives” co-opted pieces of socialist-sounding reforms. But just like the Marxist-Leninist parties in the old Soviet orbit, today’s “democratic socialists” are … well, conservative.

They don’t want the wage system to go away. They just want to run it.

They don’t want the workers to own the means of production. They just want to tax and regulate it.

They don’t want a classless society. They just want to be the new ruling class.

US president Donald Trump is already touting the 2020 presidential election as a referendum on “socialism.” Are any real socialists going to show up for that fight?